Dead only knows what the grass is thinking about.
The set contains 24 cards in the hills location + 1 random surprise card.
Price approx.: 10 EUR or 11 USD

Dead only knows what the grass is thinking about.
The set contains 24 cards in the hills location + 1 random surprise card from another set.
In the box you will also find a detailed instruction [in Polish] on how to use the cards, indicating areas inaccessible, hard to reach and obstacles, and a surprise gift. You can download the gift by scanning a QR CODE placed inside the instruction.

Wuthering Hills are a set prepared in a new printing technology. Unlike the previous sets: Forest Path and Dark Dungeons – it has a special varnished layer that allows you to write with dry-erase markers. 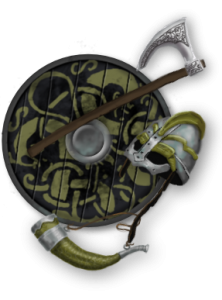 I’m going in! are sets of cards for creating tactical maps used in various role-playing games. One set has 25 cards made of a thick cardboard [620g / m2], each with a size of 5×5 inches. The set contains 6 card patterns, which during the game allow you to create  open hill areas. Each card is divided into 25 areas – 1-inch side. In areas you can put figures or markers that most often represent the heroes of players and enemies.